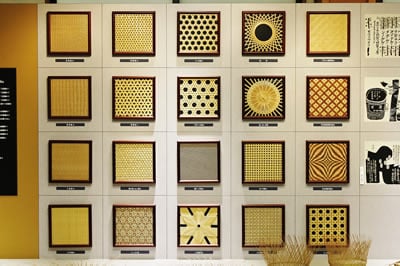 The Beppu Bamboo Craft as a Traditional Handicraft

In Japan, craft items can be designated a 'traditional craft product' under the law for the Promotion of Traditional Craft Industries. Beppu bamboo craft was one of those designated by the Ministry of Economy, Trade and Industry in 1979.
There are eight weaving patterns including "Yotsumeami", "Mutsumeami", "Yatsumeami", "Ajiroami", "Gozameami", "Matsubaami", "Kikuzokoami" and "Rinkoami". These are known as Beppu bamboo craft techniques, and are inherited techniques from earlier generations of craftsmen.
There are more than 200 combinations made using these patterns.